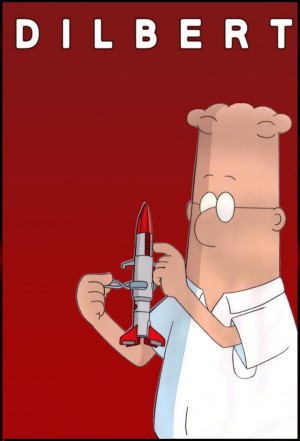 Dilbert - the most popular comic strip of the decade from creator Scott Adams - is now on DVD. With his signature turned-up tie, round glasses and buzz cut, Dilbert is already a pop culture phenomenon, providing an irreverent reference point for workers everywhere.

Developed and produced by Emmy Award-winning writer/producer Larry Charles, and from Co-Executive Producer Scott Adams, Dilbert the series, follows the "every man" as he copes with daily life at The Company. Daniel Stern stars as the voice of Dilbert, while Chris Elliott voices his roommate Dogbert, who views the entire world as existing for his personal entertainment. Joining Dilbert in the office are his fellow engineers: the no-nonsense, caffeinated Alice (Kathy Griffin) and selfish, slothful Wally (Gordon Hunt).