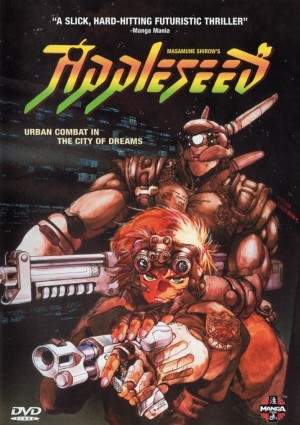 The fierce battle takes place in the cyberpunk mega city, Olympus. After the devastation of World War III, the scattered governments of the world construct the perfect city administered by perfect Biodroids - artificially created half-human half-robots. Life in Olympus is carefully controlled and monitored - and some of its population have had enough.

A dedicated band of terrorists plot to destroy Gaia, the central computer, and restore freedom to mankind. After a daring raid on a high security facility, they have the weapons and information they need to complete their mission - including they key to the end of Gaia. Will they be stopped before they ruin the dream of paradise?

Join two of the finest and most reckless officers on the force in this high-tech animated thriller. Based on the internationally successful comic series by Masamune Shirow, Appleseed is a high-octane, action packed race against time as the future of a civilisation hangs in the balance.