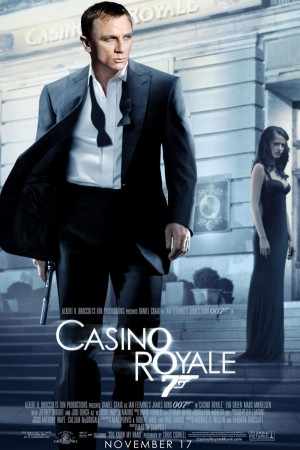 Casino Royale introduces James Bond before he holds his license to kill. But Bond is no less dangerous, and with two professional assassinations in quick succession, he is elevated to "00" status.

"M", head of the British Secret Service, sends the newly promoted 007 on his first mission that take him to Madagascar, the Bahamas and eventually leads him to Montenegro to face Le Chiffre, a ruthless financier under threat from his terrorist clientele, who is attempting to restore his funds in a high stakes poker game at the Casino Royale.

"M" places Bond under the watchful eye of the Treasury official Vesper Lynd. At first skeptical of what value Vesper can provide, Bond's interest in her deepens as they brave danger together. Le Chiffre's cunning and cruelty come to bear on them both in a way Bond could never imagine, and he learns his most important leasson: trust no one.