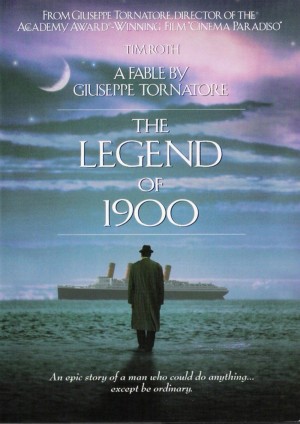 From the director of the Academy Award-winning Cinema Paradiso, this magical fable from a bygone era movingly tells the tale of an extraordinary man who lives a remarkable life without setting foot on land. Abandoned atop a piano and raised by a lowly crew member in the bowels of a luxurious cruise ship, the boy is dubbed 1900 for the year he was born. As he grows up, he is drawn to the piano and discovers he has an amazing gift for creating music. The prodigy dazzles the passengers, and his reputation spreads around the world with record producers clamoring to capture his magic. But he refuses to leave the ship to pursue promised fame and fortune. Only when he spots a beautiful girl on-board does he become determined to join the outside world and live a normal life. But is that the life he really wants? With a beautiful score by Academy Award nominee Ennio Morricone and heartfelt performances by Tim Roth as 1900, Pruitt Taylor Vince as his trumpet player pal and Clarence Williams III as jazz legend Jelly Roll Morton, this lyrical, transcendent film will strike a chord in your heart.