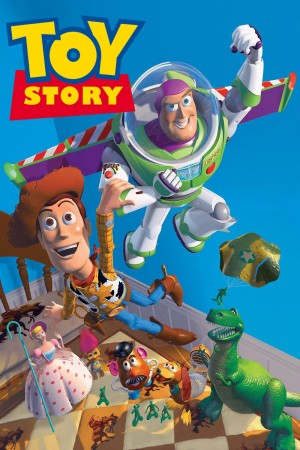 When a flashy new "space ranger" named Buzz Lightyear enters the world of a pull-string cowboy named Woody, it sparks an outrageously funny tiff between toys.

Now, Woody's top spot in the heart of his young owner is in jeopardy... and soon so are the lives of Woody and Buzz. Accidentally whisked away from home and into the clutches of a neighbourhood bully, these two squabbling rivals must work together as a team if they are to escape. With toy box pals Rex the dinosaur, the Green Army Men and Mr. Potato Head ready to lend a hand, Woody and Buzz unite in friendship for a phenomenal adventure home.

Visual wizardry, uproarious laughs and the coolest characters ever assembled transform the world's first computer-animated feature into an incomparable movie marvel. No matter what your age, TOY STORY will dazzle you every time.