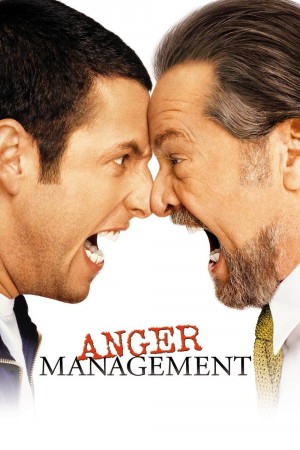 After a small misunderstanding aboard an aeroplane escalates out of control, timid businessman Dave Buznik (Adam Sandler) is ordered by the court to undergo anger management therapy at the hands of specialist Dr. Buddy Rydell (Jack Nicholson). Dave reluctantly accepts the doctor's counselling, but after another mishap Buddy steps up his aggressive and unorthodox treatments by moving in with Dave. As Buddy wreaks havoc with every aspect of his life, Dave must decide whether to crawl back into his shell or finally stand up for himself.

Laugh like crazy at this outrageous comedy that will drive you mad with laughter. The top-notch supporting cast includes Marisa Tomei, Luis Guzman, Woody Harrelson, John Turturro, and Heather Graham. Anger Management is just what the doctor ordered!