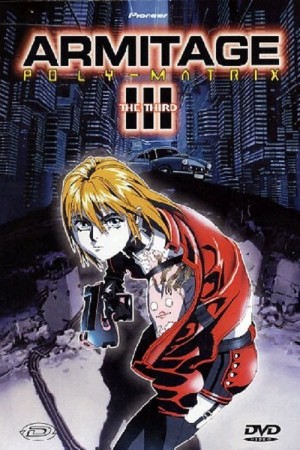 2179: Mars has been colonized by Earth, populated by humans and "Second Type" robots - robots designed to perform the menial tasks humans won't do. Then there are the "Third Types" - illegal humanoid robots designed by a nationalist force to look and behave exactly like humans - living undetected among the Martian population as citizens, until one man, Rene D'anclaude, declares war on the "Thirds", starting a massacre in a vow to destroy them all.

That's where she comes in. She's Naomi Armitage. A cyberpunk Martian cop in hot pants, with an attitude as deadly as her gun. She's also a "Third" and her fight against D'anclaude is a fight for her survival. Her partner, Ross Sylibus, lost his partner at the hands of a cybernetic killer and hates robots. Ross must face this prejudice when he is injured and receives cybernetic limb replacements, bringing him closer to becoming one of the monsters he abhors. He begins to realise that being human is more than just flesh and blood and joins Armitage in her fight against D'anclaude and her quest to discover the mystery of why the "Third Type" was created.

Armitage and Ross are brought together in a bond of love and hope as their journey uncovers a secret that could destroy two worlds!